25 years ago, in Newcastle Upon Tyne, I was 13. Every Saturday I'd tread a well-worn path in my black desert boots between HMV, Virgin, Volume Records and, for the huge bargain bin, Windows Music shop. I'd know where every band's records were. But there'd also be aisles and corners I'd avoid: the Metal section was scary and, strangely, smelt of hippy juice and the punk section just smelt. Probably farts and beer. 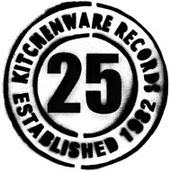 But 25 years ago, unbeknowst to me because I was too young, Kitchenware Records was formed. Keith Armstrong and Paul Ludford at the time ran a successful club called Soul Kitchen at Tiffanys - "New Sounds, New Hope, Newcastle!!!", it said on the flyer. And on the back of their biggest gig at the club, New Order, they set up a record label.

Cut to two years later and, having since found out about Kitchenware, I got in touch - I was brazen 15 year old by then - and did my work experience there. From then on I'd spend intermittent days or weeks there until I found other places to hang out - or more than likely, Keith and Paul got fed up with a stupid-arsed teenager hanging around.

Kitchenware Records didn't have the artiness of the other indie labels at the time like Factory and Postcard, but it did have the ambition and above all the passion. And unlike the other labels, it married its acts to a major record company, more a 'dependent' label than 'independent. This was quite unique at the time and it meant their acts could benefit from the major's huge budgets.

Those bands on the label at the time have made their mark on pop's pantheon in some form or other. Whether through sheer fan devotion and industry name-checks: Hurrah! and Martin Stephenson and the Daintees or through international recognition and hits: Prefab Sprout and The Kane Gang . It was great as a 15/16 year old sat in the office in the middle of the eye of the storm. All the acts were having huge success: Prefab Sprout were about to release Steve McQueen and jetting around Europe on promo trips; The Kane Gang were having hit singles; Hurrah! had found their anthemic sound and Martin Stephenson and the Daintees were touring all over the shop. As well as making copious cups of tea and coffee (that bloody freezing toilet where the hot water was!) I would be thrown a box of tapes and asked to pick out the ones I liked. None were ever signed, but I do remember picking out a Loyd Cole and the Commotions tape. I can also remember voting on The Kane Gang's Gun Law as the follow-up to their biggest hit Closest Thing to Heaven. It flopped.

Just listening to the tracks I've chosen below you'll understand why I loved them: the tunefulness, the genuine sentiment and the pop sensibilities. Click on the band names to buy the CDs highlighted here. The Kane Gang album is trés expensive though!

PREFAB SPROUT
They've always been a favourite. I never thought Prefab Sprout were the arch, art rockers they were portrayed as. I always thought they were a warm, funny band who produced songs which reflected that. Every time they were in the office, there'd be sharp banter and a hive of activity. And there were the kind gestures too, like Marty McAloon making me, the workie, a cup of coffee. Lovely man. Walk On got played to death on my decks and Swoon was completely different to EVERYTHING in the charts at the time; every time I put it on I was transported to exotic places like Jodrell Bank which I've since found to be anything but!
Prefab Sprout - Walk On (mp3 download) - Lions In My Own Garden EP
Prefab Sprout - Cue Fanfare (mp3 download) - Swoon album 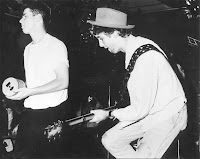 HURRAH!
Hurrah! will always be the massive band they never were in my mind. The songs were big, bold, urgent and anthemic. The boys themselves were lovely. Just very warm Geordies who loved their music and loved performing it.
Hurrah! - Hip-hip (mp3 download) - Boxed album
Hurrah! - Who'd Have Thought (mp3 download) - Tell God I'm Here album 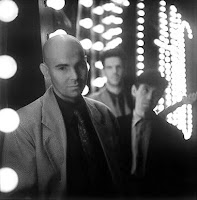 THE KANE GANG
I remember Martin Brammer, the lead singer, coming into the Kitchenware offices looking vare peturbed. He'd been followed around Newcastle by a bunch of girlies for over an hour. It was the trademark cap that did it. He took it off and lost them. The stalkers were fickle in those days. Their first album - with two tracks from it here - was yet another summer favourite. The big hit, Closest Thing to Heaven was filmed at the local summer fair, The Hoppings. Loads of girls in pencil skirst and white court shoes! And I was fleetingly in the video for Gun Law, which I've hunted high and low for! Martin has continued songwriting and has just scored big with James Morrison. Vare glad to hear...
The Kane Gang - Crease In His Hat (mp3 download) - The Bad and Lowdown World of the Kane Gang album
The Kane Gang - How Much Longer? (mp3 download) - The Bad and Lowdown World of the Kane Gang album

All in all, this posting isn't about nostalgia. It's about music which has remained with me for years and which I still play now. Also, I was at such a formative time 25 years ago that the people I met through Kitchenware have always figured larger in my mind than even they would ever think.

It's good to be a bit wistful every now and then. It makes you realise how lucky you are to have things like the above in your life.

Lovely post, I have to say the first 5 Kitchenware singles have to be some of my favourite records ever. I hold a special place in my heart for the Kane Gangs' "Brother Brother" and it's b side "We'll Take This Train". Great stuff and in a way Kitchenwares' original philosphy wasn't a million miles away from Postcards'.

Murray, you lucky man having the first five Kitchenware records.